Ireland coach Mark Aston hailed his side’s shock 22-12 win at the Tallaght Stadium, Dublin over favourites France in the Rugby League European Cup as; “Massive, probably one of the biggest in the history of Irish rugby league.”

His side, containing nine debutants and with only three one hour training sessions together, were never behind and willed on by a vociferous home crowd. “I hope the governing bodies will realise how massive the international game can be and now properly support it,” Aston continued prior to both sides going to a formal reception in the capital. The win was based around attitude, commitment and heart - Ireland’s call - there were heroes everywhere, I couldn’t be prouder of them, it is one of my all-time favourite victories.

Aston’s plans were further upset when experienced prop Luke Ambler was forced from the field after only four minutes and was unable to return. “We got our energy from within,” Aston added. “I said last night in our team meeting that we wanted to earn respect; of each other, our opponents and the Irish fans and we’ve done that.“

Josh Toole was the man of the match but Bob Beswick was outstanding, he was the glue, he is so smart and skilful out of dummy half, one of the very best in the business and set a captain’s lead. He has worked closely with Liam Finn who is assisting me and it showed.”

Aston continued, “Young lads like Robbie Mulhern – who was 20 today - and Joby Murphy just threw themselves into it and were magnificent especially as we had very little rotation and Shannon McDonnell ‘s two tries on debut were vital. But I was equally as please with the two domestic-based lads on the wings. They showed what talent the sport can attract.”

If Ireland win the competition, they will automatically qualify for the 2017 World Cup but Aston is unconcerned about the added incentive. “We are going to enjoy tonight because the lads deserve to, they did everything we asked and we are going to celebrate as only the Irish can. “Then we’ll re-focus for what will be a very tough game here against Scotland next week after their win last night.”

McDonnell, whose 2014 domestic season was cut short by a fractured jaw playing for St Helens, opened the scoring in the seventh minute, latching on to a clever kick from Halifax half back Ben Johnson, the conversion missed by Casey Dunne in the tricky wind. France earned the wrath of referee Tim Roby, conceding penalties, but the home defence was also superb in the opening quarter as the Irish were pinned on their own line.

The Wolfhounds gained a foothold in the French quarter and, on the half hour, Haydn Peacock, who plays his club rugby for Carcassonne, doubled Ireland’s lead, touching down Callum Casey’s kick, Dunne’s conversion attempt hitting the post and they nearly extended their 8-0 lead when the chasers were offside for Beswick’s kick. The Irish lead became 12-0 six minutes into the second half when McDonnell finished off a sweeping move involving Toole and Peacock with superb offloads for his second try but again the kick went wide.

Beswick’s clever grubber – one of a number that kept pushing the French back - saw Peacock claim his double in the 53rd minute, again the conversion coming back off the upright.

Hull KR second rower Kevin Larroyer sparked a French fight back five minutes later with their first try to delight the loud travelling fans in the 1,428 crowd, and it was game-on 10 minutes from the end when, after Tony Maurel had been dragged down a metre short, Catalans Dragons hooker Eloi Pellissier showed his pace to cross and Remy Marginet kicked his second conversion, off the post, to make it 16-12.

Ireland defended heroically in the final minutes, Beswick’s kicks again crucial as an escape route, and they made sure of their first win for two years thanks to a last-minute try by Dewsbury’s Murphy, Athboy Longhorns’ Dunne with his only goal. 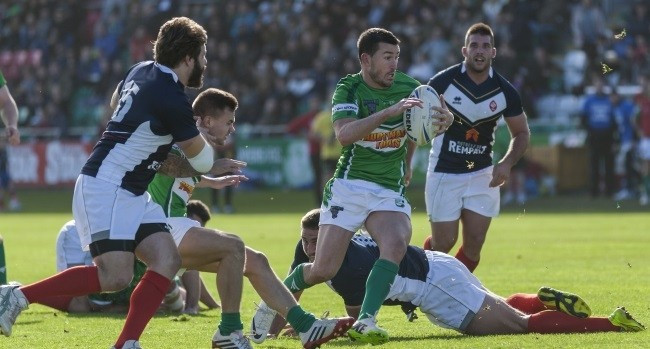