Scotland are within touching distance of their first ever European crown going into their home game with France on Friday, after beating Ireland 25-4 in Tallaght Dublin. Avoiding defeat in Galashiels will see Steve McCormack’s side win a place in the 2016 Four Nations, while defeat could open the door for the French or Ireland, if they claim a big win over Wales in Wrexham next Sunday.

“It was good to see a top win by our U19s over Ireland in the curtain-raiser,” said McCormack, “And we were able to replicate that with the seniors, It’s great for Scottish rugby league to see everybody working together.

“Friday night on home soil will be a big occasion, on the back of a terrific World Cup last year, but we cannot afford to get carried away. We are making steady progress.”

Skipper Danny Brough, man of the match in the Bravehearts' opening win over Wales, was again influential, creating two of the Scots’ three tries as well as kicking four conversions and a drop goal. Both sides squandered early possession in the strong wind and gave away penalties, Scotland prop Adam Walker – who was  a handful throughout - with the first clean break. There was an early interruption in play after a head injury to Jobe Murphy which saw the Irishman stretchered off following a tackle by Joe Wardle that was put on report by referee Richard Silverwood.

Scottish prop Ben Kavanagh knocked on from an Oscar Thomas pass as the line beckoned, Ireland missing a similar opportunity and the hosts also saw Shannon McDonnell held up over line by David Scott. Wolfhound debutant James Toole was held short and it looked as though the first half would finish scoreless.

But, seconds before the break, Callum Phillips touched down Danny Brough’s kick which, with the wind holding it up, was missed by Casey Dunne to open the scoring, Brough adding the goal. Eight minutes into the second period Scotland doubled their lead, Walker putting Callum Phillips in space; he found Joe Wardle who sent in Alex Hurst on the left, Brough again on target with the conversion.

Scottish forwards Walker and Josh Barlow impressed as the packs were on top, a great run by Ireland’s Luke Ambler coming to nothing as he lost the ball once he was finally tackled. Braveheart hooker Danny Addy was another who had a fine game and made a decisive break but looked the wrong way for support. Scotland gave a debut to Joe McLean in the 62nd minute and, a minute later, Brough put his side three scores ahead with the clinching drop goal To make it 19-0

James Toole pulled a try back for the Wolfhounds with seven minutes left following Haydn Peacock’s break and Shannon McDonell’s pass to give the home crowd something to shout about , but there was still time for Kavanagh’s pass to send Addy clear again and he put in Thomas by the posts for the final try. 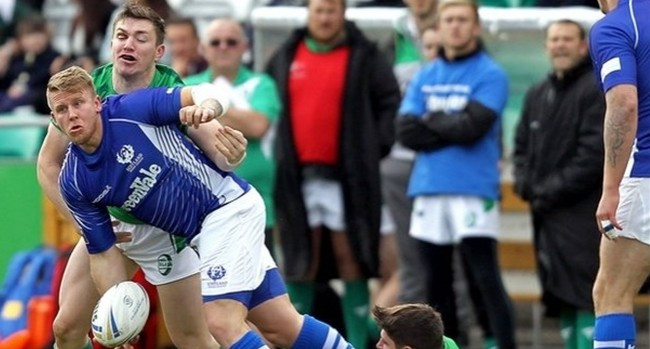