Wales gave a good impression of themselves in Albi against a strong French side and the inexperienced Welsh will go away with a lot of credit and plenty of memorable moments despite a 42-22 defeat which sees them unable to win the European Championship.

Scotland are now in pole position to win the title after a 25-4 win over Ireland today but France will overtake them if they win by 18 points against the Scots next week. If they do that, all will rest on the Irish against Wales in Wrexham next Sunday. They currently have a points difference of minus 11 so they will need a large win to overtake both of their rivals.

Wales fielded their 500th player, in North Wales Crusaders’ Owain Griffiths who entered the fray in the 27th minute, Rhys Williams’ scored a recorded extending 15th try for Wales, while Christiaan Roets scored his 13th which puts him above Iestyn Harris in second place in the all time Wales try scoring charts.

The French won with a few moments of class and clean breaks made at least three of their seven tries. However Wales refused to give up, didn’t let in a French try in the last 25 minutes, and one can only wonder what the score might have been had the side not been hit by Super League players withdrawing from the squad before the tournament started.

France took the lead on eight minutes when Clément Soubeyras received the ball from Theo Fagas and sprinted to the line. Remy Marginet converted. Wales levelled straight away. After winning a scrum after a French mistake from kick-off, Dan Fleming forced his way over and Lewis Reece converted. Wales gave their all and held on against their more experienced opponents until the 20 minute mark which is when a fine break from Jason Baitieri set up Theo Fages to go over just left of the sticks. Marginet converted.

And two tries just before the interval just about put the game out of Wales’ reach. Jean-Philippe Baille charged through for France’s third on 35 minutes which Marginet converted and just seconds before the half-time hooter, Mathias Pala also broke through the Welsh back-line for the fourth. Marginet kept up his 100% record to put the French 24-6 up at the break.

Marginet broke through from kick-off and less than 50 seconds after the interval, France had further increased their lead. The same man converted to make it 30-6. Wales hadn’t given up. Matty Fozard received a high bomb from Paul Emanuelli and did well to score Wales’ second try that Reece converted. But tries in the corner from Mathias Pala and Marginet, both converted by Marginet extended France’s lead further to 42-12.

Again Wales refused to lie down. A fine passing move led to Rhys Williams going over and Reece again added the extras. The try competition continued between Roets and Williams after Roets forced his way over and Reece missed for the first time. The final score could have been even closer. Williams almost got his 16th for Wales but was pushed into touch at the last second while Dan Fleming also had a try chalked off for a forward pass following a fine run from Ollie Olds.

Wales coach John Kear said: “I was impressed with them, at 42-6 down you’re looking down the barrel of an embarrassment but that didn’t happen and they showed some true Welsh spirit and passion and fought their way back into the game. The pleasing thing for me was this was what we were trying to do for the last game and the first three quarters of this.

“Theyre very young and they need some confidence and the only way that you can get confidence is to play against good teams and France were a very good team. We played here today in 24 degree heat and it took its toll at times, but we finished very strongly and we can look at what we need to improve before we face Ireland in Wrexham next Sunday.” 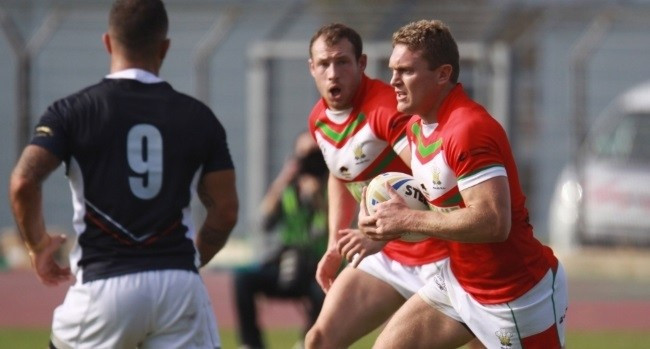