Four tries in the final quarter swept Denmark to a victory that had hardly seemed likely for most of the preceding 60 minutes.

The 24-12 final score, added to their 30-16 win in Sweden in May means Denmark retain the Nordic Cup they won last year, and therefore become the first nation to achieve back-to-back titles.

The match, played at Roskilde’s “Vor Frue” sports ground, was a tense affair with a well-drilled Norwegian team having the better of play for much of the game. They were especially sharp around the ruck area, frequently taking advantage of sloppy Danish marker defence to make easy yards. To make matters worse, Denmark gave away a string of penalties and coughed up the ball all too easily in the first half, gifting at least 60% of possession to their opponents.

The penalties, knock-ons and forward passes by both teams made the first half a somewhat scrappy affair, and the physicality flared up once or twice as the two teams wrestled to gain an advantage. Referee Craig Swanson kept good control of an abrasive game that bubbled but was never allowed to boil over.

Norway did their best to dictate play, with hooker Milligan pulling the strings from dummy half. But for all their indiscipline and inability to hold on to the ball, the Danish defence held firm and they scrambled well on their line.

Norway pressured, were held up over the line, forced repeat sets, penalties and goal line drop-outs, but to no avail.

It was in fact Denmark that scored the first half’s only try on one of their few visits to Norway’s 20m area. Captain and half back Viiga Lima dummied the drop off runner and tipped on to second row Thomas Hobbs, who bust the line, drew the full back and put prop Jesper Ika through to open the scoring. Stand off Rich Naylor was unable to add the extras, and the 4-0 half time score probably told the key story of the game: both defences were “up for this” and victory would come to the team that took its chances.

Having had the better of the play in the first half, Norway may have felt hard done by, going in to half time behind on the score board, but they returned with renewed intensity and again asked question after question of the Danish line. Strong running epitomised by debutant prop Steven Larsen demanded resolute defence, and the Danish effort was led by loose forward Eugene Hanrahan with Mubanda, Ungureanu, Hobbs, King and Ika all getting through a lot of tackles.

Eventually the Norwegians got their breakthrough, and it was no more than they deserved, as they punched a hole in the Danish ranks with hooker Milligan going through for a score that took them 6-4 into the lead, once wing Svein Åge Breimoen had converted.

Norway continued to press, and although Denmark were making fewer mistakes and gaining a more equal share of the possession, it seemed like the Norwegians were in the ascendency. It was a double breakthrough around the 60-minute mark that swung the game. Stephen Kristiansen, on debut for Denmark, picked up a loose ball in his own half and ran an intelligent line to beat the chasers and go in under the posts.

Then, just one set after the restart second rower Silas Mubanda doubled the damage. In a man of the match performance, he had recovered after going down in a heavy collision with Svein Åge Breimoen, in one of the games biggest hit-ups. Coach Nigel Kitching reintroduced him further out on the wing and Mubanda exploited the extra space to bust the line from his own 40m mark, step the full back and go in under the sticks himself. Naylor converted both tries and the Norwegians found themselves going from a position of strength to being 16-6 down in a matter of minutes.

Now it was Denmark’s turn to get their tales up. They had been struggling to make inroads around the play the ball as the Norwegians worked hard in their close defence, Peder Jaavall notching up an impressive personal tackle count. So Denmark started to attack wider off the pivots and this paid dividends.

Two more tries followed, both in the left corner. The hard working Andrei Ungureanu barged over after sustained Denmark pressure, then a flowing team move saw wing Morten Dam released to touch down in the corner and put the Danes 24-6 up. Naylor narrowly missed both touchline conversions but Norway were still left needing to score 4 times for victory, and the game was decided.

To the Norwegians’ credit, their team, featuring 9 debutants did not give up, and they came again, attacking the Danes, who were visibly tiring on one of the hottest days of the year so far.

A consolation try for Rowan and a second conversion from Breimoen six minutes from time reduced the deficit, but the defending champions played out the remaining sets to savour a third win in a row over their northern cousins. 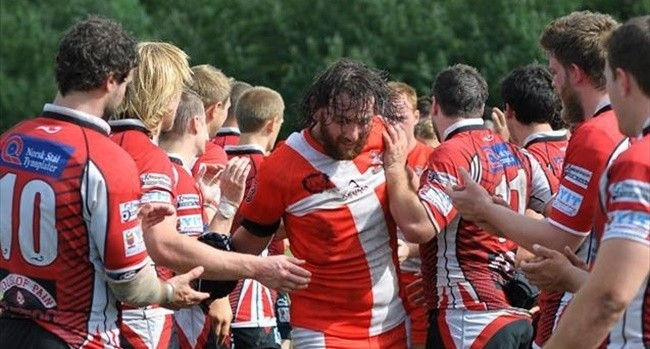