Serbian U 18 team defeated away Bosnia and Herzegovina’s juniors 36:6 (24:0) in a friendly match held in Vitez. The game was played at the stadium NT Rijeka as a part of City of Vitez annual celebration.

Experienced Serbia’s juniors had no problems with their peers in a meeting of two friendly federations.

Vladimir Milutinovic led visitors with two tries, while making all of his six shots on goal. The youngest Serbian player first broke the host’s plane who countered well in the beginning of the match. But two tries scored in the 12th and 23rd minute, were crucial for the final score. By the end of the first half, Serbia doubled its lead with scores by fly-half Branko Carapic and Denis Bajrami.

The game was completely out of the Bosnia’s hand in the opening minutes of the second half. Mihailo Ilic scored in 45 minutes, and seven minutes later Djordje Stosic also added one.

Serbian national team coach Admir Hadzic was very pleased with performance of his boys: “Both teams have to be pleased with the game. Getting a win is really nice, but also we had a very nice welcome here in Vitez. I want to congratulate to both teams efforts. I expect that these meetings would can more frequent, because it is good for this kids to have this 'neighbor' derbies."

His counterpart from Bosnia, Dado Vrebac did not hide his emotions after the debut of its junior national team: "A big thanks to all our juniors, who gave their best and left their hearts on the court today against a very good Serbian side. The winner should be congratulated heartily, they were better, and it’s up to us work harder in the future.

We have room for improvement, with more joint practices we can become more competitive. I am proud that the players gave their best and in the end we even got a try.. This is just the beginning and with the work and commitment, together we will be a very good team in the future." 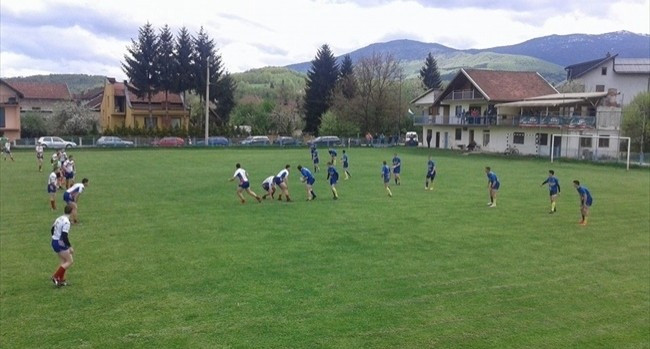