Spain overcame an early scare to beat a young Italy B side 36-24 in Alicante as they prepare for their crucial European Championship C match which starts next week, against Malta in Valencia. Taking a national team game away from Spanish rugby league’s headquarters in Valencia for the first time, the Asociacion Espagnola de Rugby League was rewarded with a crowd of 1200 in Llometa Stadium in Muro de Alcoy.

Italy B took the lead after 5 minutes through wing Paolo Roncaglioni but two tries from Daniel Garcia and Aitor Davila put Spain ahead. A tight tussle ended 18-18 at the break.

The first time of the game was very even. Italy went ahead 0-6 at 5 minutes (Roncaglioni) and Spain achieved after two tries (Garcia and Davila) for 12-6. The first half ended with 18-18. A more adventurous XIII del Toro outfit broke the game open in the second period, with Antonio Puerta gaining the man of the match award on his debut with a hat trick.

Spain, who planned the match as preparation for the most important series in their short history, will be competing at European Championship C level for the first time when they take on Malta and then travel to Greece in October. The winner of the competition will quality for the European section of the 2017 Rugby League World Cup qualifiers.

Spain coach Darren Fisher said: 'We are really looking forward to such a high profile game against Malta this week, the mood in the squad is a mix of excitement and eagerness for the game. The squad know that these world cup qualifiers are at another level, and we need to prepare well for the intensity the match will bring. We know the capabilities of Malta and it will certainly give us a really big test.

“Preparations have gone really well these last couple of weeks and we’ve also seen a higher number of quality players in the squad that all deserve a shirt next week and that shows me how much rugby league is growing and developing in Spain. The meaning attached to hosting our first world cup qualifier will have a dramatic effect for us, our support and raising the level of development of the game here in Spain.”

Tiziano Franchini, Federazione Italiana Rugby League vice-president and Italy B player-coach, said, “We just missed experience on the field especially during the second half. We played with 15 debutants and 11 were under 20, selected from the team that played this summer against England Lionhearts Youth.”

His captain, Giliberto D’Elia, said, “We are disappointed with the score; all our young player gave 100% and they fought until the final whistle. I am proud of them and their performace. We needed to be stronger at the begining of the second half. 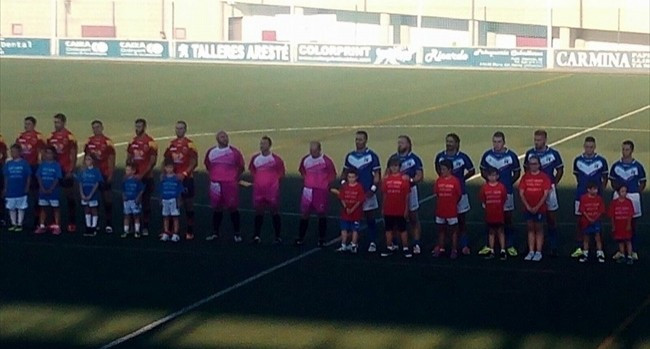