GROUP 1 - GAME 1
Ireland, like Scotland yesterday, used their recent World Cup experience and togetherness to put their rugbyleague.com European Cup group minnows to the sword, defeating Serbia 82-0 at picturesque Tullamore in a first ever meeting between the sides. The Wolfhounds, who scored at a rate of a point a minute, led 46-0 at the break and kept up the barrage to the final whistle, finishing with 14 tries, four of them from Salford full back Karl Fitzpatrick.

Coach Andy Kelly was pleased with the effort, commenting "We've not had a long period of preparation but I am pleased with how we performed and how cohesive we looked on the field. Going forward the focus will be on cohesion, consistency and a willingness to work for each other as a team."

A crowd of just under 500 witnessed the clash, with the town in the grip of sporting fever, their Hurling heroes having made the All-Ireland Final for the first time in 15 years and playing at the same time. The Emerald Isle got off to a blistering start that set the tone, running in five touchdowns in the opening quarter to take an unassailable lead, hooker Bob Beswick and man of the match, stand off Stevie Gibbons at the heart of their fluent moves. Dublin City Exiles’ debutant John Coleman was first across in the third minute, Liam Finn converting for the first of his nine goals.

Serbia came close to bouncing back straight away when centre Milos Milanko looked certain to score, only a superb tackle from Carlow Crusader Gibbons forcing a knock on. Winger Tim Bergin doubled the Irish lead, sent in by a superb pass from Liam Harrison and Leeds prop Luke Ambler burst clear in midfield and went 40 metres for the first of his two debut tries soon after. With the Serbians struggling with the speed of the game, Finn jinked clear and Fitzpatrick linked and showed a clean pair of heels to make it 28-0.

Hardworking back row pairing Dave Allen form Barrow and York’s Sean Hesketh both crossed before the break as did powerful centre Harrison who was a handful throughout. After the break, the inexperienced visitors were more attuned to the pace of the game but Bergin brought up the half century a minute into the second period. Serbia, expertly prompted by stand off Dalibor Vukanovic enjoyed a good spell when they had five minutes inside the Irish twenty only for the Wolfhounds to weather the storm.

Harrison, who was causing major problems for the Serbian defence, set up Fitzpatrick for his second ten minutes into the half, Ambler claimed his brace in the next set and Fitzpatrick added two more in quick succession to take his tally to four. Brendan Guilfoyle rounded off the scoring with two minutes to go to give Ireland an emphatic victory which could have been more when Harrison set up Gibbons only for the Carlow man to drop the ball with the line at his mercy.

Although disappointed not to put his name on the score sheet, Gibbons was happy with the outcome. "We had a couple of goals that we set before the game and we stuck to them” he said. “Personally it is all about encouraging the domestic league for me, I think we are making a lot of steps in the right direction. I say this every year, we get a lot of second and third generation Irish, but once they put the jersey on they do themselves proud."

Serbia coach Ged Stokes was realistic in his appraisal. "We knew it was going to be a hard game for us today, there was no thoughts in our minds that it would be anything else” he said. “There are a lot of things to focus on, especially the technicalities but we are contributing, that is the main thing. We need to make sure that we are fostering rugby league throughout the world. The more we play, the better we will get. Our aim is to get better by the time we play Italy and hopefully we will get something positive out of that game.

“For eighty minutes they gave it everything that they had. It might not have looked like that at times, but they were getting beat by plays that they have never seen before. We have to start somewhere and I am proud to be supporting Serbia becoming a rugby league nation."

The Wolfhounds now look to Wales in two weeks where a win would secure a place in the European finals. 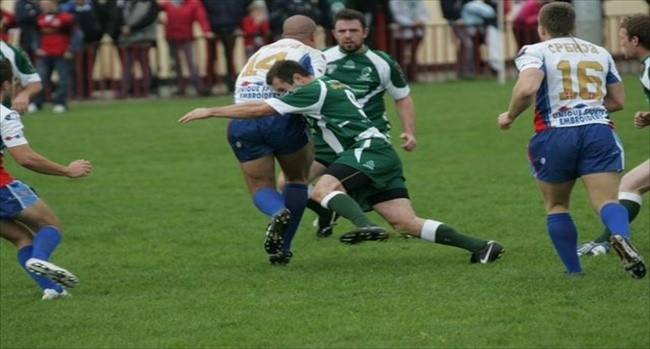