GROUP 1 - GAME 2
Wales will take on Ireland in Pontypridd next Sunday for a place in the rugbyleague.com European Cup Final after beating Serbia 88-8 in Smederevo on Sunday afternoon. However the score line does not reflect the effort that Serbia put into the game, the hosts never giving up the fight throughout the entire 80 minutes.

Iestyn Harris’ young side, fresh from their encouraging hit out against England, opened smartly and took the lead after only three minutes when Rhys Williams fed exciting full back Elliot Kear to go over for his first international try; Ian Webster converting. Centre Roets was indebted to the British Embassy in Serbia, in particular, who solved a late visa issue on Friday as he was about to board the plane and responded with a hat trick.

Straight from kick-off, Wales doubled their lead as Bridgend Blue Bulls’ man of the match Christiaan Roets broke clear from the half-way line outpacing his markers to score. Serbia won the ball back straight away and gained their second penalty of the game. From the second play, Oldham’s Austen Novakovic twisted his way over the line much to the delight of the home crowd, Filip Brkic adding the extras. Wales restored the balance four minutes later after winning a scrum on Serbia’s 10 metre line and Jordan James, in his 15th consecutive international appearance broke through the big home defence to ground. Wales scored their fourth try on 19 minutes, hooker Neil Budworth created the gap as he slipped the ball to James and the prop outpaced his markers to race 50 metres for his second.

Serbia battled for a second try and won a couple of scrums and another penalty inside Wales’ half, Brkic choosing to kick it to bring the score back to 8-24. Wales took advantage of a loose ball to score their fifth try, Ashley Bateman was quick to the ball and made the metres, Geraint Davies did well under pressure to slip it to Matt Thomas who forced his way over in the corner for a debut try. From the re-start, the visitors scored another long range try, Ian Watson created space for Ross Divorty who outpaced full-back Ivan Šušnjara to ground under the posts. Rhys Williams followed him over on the left flank with Webster kicking an excellent conversion to make the score 8-40 at the interval.

The Serbian defence did well to hold Lewis Mills up over the line to prevent an early second half Wales try and the hosts created a number of attacks in the first ten minutes of the second half but were just denied on several occasions, with the hard-working Igor Kesegi close while Filip Brkic’s grubber kick was picked up by Kear. Wales responded with another long range effort from Roets and Divorty took advantage of a loose ball to go over for his second on 57 minutes, Webster converting once again.

The next four Welsh tries came on consecutive sets from kick offs, Lee Williams following good work from Webster and Kear, Rhys Williams sprinting down the left for his second, Roets grabbing his hat-trick and Ashley Bateman powering over on the right wing in a blistering sequence. Serbia tried one last act of defiance, Ivan Šušnjara looked to have broken free but was stopped in his tracks by Lee Williams causing him to spill the ball and from the resulting set, Webster went over for Wales’ 14th try which he converted himself. With two minutes to go, Ian Watson took advantage of a loose ball to go in between the posts for Wales’ record score in competitive rugby league. 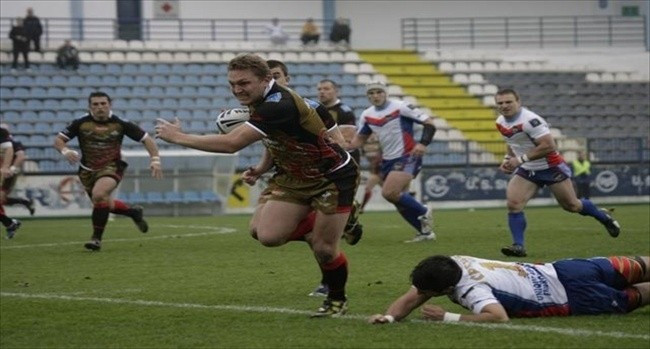