Scotland looked in ominous form as they opened the rugbyleague.com European Cup with an 18-try romp against an inexperienced and ultimately overwhelmed Italy in Padova. In a match refereed by Super League's top official Steve Ganson, the fledgling hosts rarely broke into the Scottish quarter although their unyielding efforts were roared on by an enthusiastic crowd of 2,179.

The Scots scored nine tries in each half, Barrow winger James Nixon leading the way with four, in a record breaking win for the Bravehearts. Leigh centre Mick Nanyn also entered the record books with a 40-point personal haul from two tries and 16 goals.

Both teams gave debuts to six players; Scotland coach Steve McCormack is rebuilding his team as they plan for next season’s qualifiers for the Four Nations. Only eight of his 17 went to the World Cup last year and just Nanyn, Kevin and Andrew Henderson, Ben Fisher, and Paddy Coupar survived from the team that was thrashed by Tonga in Scotland’s last game 11 months ago. Azzuri coach Tiziano Franchini fielded 10 of the players who had helped them overcome Germany and the Czech Republic to win the European Shield.

With a tremendous crowd still pouring into the Plebiscito – the attendance was twice that of the home team’s European Challenge Cup tie against Newcastle Falcons a week ago - Scotland showed their superiority from the off, scoring at a point a minute once Lee Paterson opened the floodgates after eight minutes, from a suspiciously forward-looking pass from Mitchell Stringer.

Brendan Lindsay’s lovely long cut-out pass sent winger Jon Steele away for the next try after a break by Fisher and three minutes later Kevin Henderson finished a move he had started on the left while Nanyn was kicking goals from the touchlines, much to the delight of an enthusiastic crowd. When Scotland forced a turnover in Italy’s half, Richard Fletcher strolled in, before young half-back Gareth Moore got a solo try on his debut.

Soon after the restart Kevin Henderson crossed following a scrum for a knock-on, and Nanyn’s magnificent conversion made it 36-0 after just 27 minutes. Fisher had torn Italy apart and was withdrawn as Scotland used all four substitutes early in the game. One of them, Edinburgh Eagles’ burly prop John Cox hit the line and spun his way over for a debut try ten minutes after coming on. Barrow winger Nixon then took centre stage from a Jamie Benn pass and from the kick off full-back Benn himself stood up his Italian counterpart Eduardo Lerna to score, Nanyn making it 54-0 at half-time.

Moments into the second-half, Cox broke and Nixon did superbly to reach over in the tackle, and five minutes later completed his hat-trick with the kind of footwork that has scored him a hatful of tries in winning the Championship this season with Barrow. Italy had hardly been out of their half with the ball in hand and struggled to clear their lines with a disappointing kicking game.

They continued tackling until the final whistle, a fact appreciated by the crowd, but they had no platform on which to show their ability with ball in hand. Scotland, who had enjoyed a day out in Venice on Friday, showed creativity and passion worthy of that stunning city to score their 12th try of the afternoon, Fletcher keeping the ball alive on the last after being held up over the line and Steele scoring on the right; Nanyn finally missing a kick with his attempt from the touchline.

When Lerna dropped the ball in Nanyn’s tackle in the in-goal area, Fletcher got his second try, Nanyn slotting the goal for a 76-0 lead on the hour. Nanyn plundered his first try on the right but missed the conversion before the first and only suggestion of an Italy score: debutant scrum-half John Grasso snatching up a loose ball and racing clear. He was tackled 40 metres out, spilled the ball and from the resulting scrum, Fisher raced 60 metres up the other end to add salt in Italy’s wounds.

Benn, who was voted Man of the Match for  his tremendous all-round display in defence and attack, showed trademark spirit to support the breaking Neil Lowe and gain another try before Nanyn powered away on the right. At 98-0 there was just enough time for Nixon to show great footwork on Matthew Sands and Lerna to score his fourth and bring up the 100 points mark.

The crowd cheered lustily and chanted “centa” as Nanyn brought up his own points haul to a record breaking 40. The Italians travel to Lebanon next week while the Cedars go to Glasgow on November 1st to complete the group games. 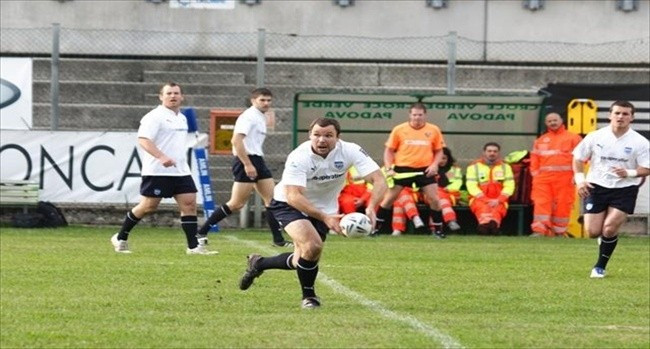