Russia set up their match away in Ieland at the end of the month - victory in which will see them qualify from Pool B - with a comprehensive 40-6 win over gallant Spain at the Fili Stadium, Moscow. Watched by RLIF chairman Nigel Wood, tries either side of half time were decisive after the Bears had got off to the perfect start.

Russia head coach Denis Korolev commented: “We achieved all that we wanted to from the game and that is satisfying. Tactically we were good, we didn’t complete every set but what we did overall was more important than any individual mistakes.”

Stand off and man of the match, veteran Aleksandr Lysokon, ran the game, his break in the seventh minute sending Mikhail Burlutskii over, Lysokon goaling. Lysokon was also on target soon after to make it 12-0 when Nikolai Zagoskin crossed but, having found their feet in the four degree cold, the visitors dug in. Spanish centre Antonio Puerta, who was a threat throughout, was unlucky to lose the ball over the line and Clement Laguerre made a terrific saving tackle following Dmitry Bratko’s break, Zagoskin held up on the last.

Just after the half hour, Leonid Kalinin trampled over two would-be tacklers, setting the position for Petr Botnarash, operating at hooker, to send over giant Kirill Kosharin by the posts who was switched from prop to centre.

Lysokon goaled and, four minutes after the break, cleverly stepped his way over and added the extras to make it 24-0. His long pass then freed Kalinin who sent Bratko in at the corner, the winger converting his own try from out wide but the visitors earned due reward for their unstinting effort. Gonzalo Morro put Leandre Torres clear and his pass saw Juan Pablo Rango cross between the posts, Danny Garcia goaling.

As the Spaniards tired late on, the hosts scored twice more, Kalinin with the run that saw Igor Chuprin over and the best move of the match seeing the ball spread from left to right for Lysokon, Denis Tiulenev and Botnarash combine to create the overlap for Vadim Buryak to speed into the corner.

Spain head coach Darren Fisher had few complaints as his side faced their toughest international test to date. “We were poor in execution and completion, especially on the first tackle, and against such a big side that’s going to hurt you,” he said. “Well done to Russia, congratulations to them, a lot of their guys have been together for a while and that showed. Our focus is now about bouncing back against Ireland and putting some things right, the boys have got to believe in themselves and pick themselves up and that’s what we’ll try and do.” 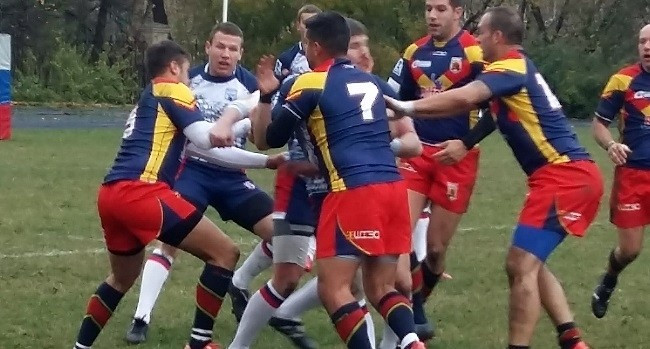