GROUP 2 - GAME 3
In weather more akin to the British Isles than the Middle East, Scotland duly qualified for the rugbyleague.com European Cup final, their patience, greater discipline and the immensely reliable boot and presence of Mick Nanyn the key elements on a tough afternoon. The Scots are in their first final, building on their excellent efforts in the last World Cup while for the Lebanese, there was effort aplenty but too often undermined by inherent frustration.

Bravehearts coach Steve McCormack was delighted by his side’s achievements. “It was as tough as we expected” he said “and about who would adapt to the conditions the best. The win perfectly epitomised the spirit in our camp especially keeping Lebanon at bay when we down by two men, that was a fantastic effort. We are not a team full of superstars but we will always work hard for each other. No matter who we play in the Final, we will come up against a well coached side.”

In incessant rain and blustery wind which began overnight and turned the pitch into something of a quagmire with standing water, conditions were always going to dictate the play. Both sides struggled with early completions, although the Cedars settled marginally the better, leading appearance maker Chris Salem – winning his 15th cap – and prop John Koborsi noteworthy in their efforts. Ball control was understandably at a premium allied to a plethora of penalties which tested the early patience of Kiwi referee Leon Williamson.

Jon Steele made an important tackle to deny Josh Mansour as the sides traded knock-ons in the opening tackles of sets, the early play confined to the Scotland quarter. George Ndeira’s chip to the wing saw James Nixon taken into touch on his own ten, Adnan Saleh committing a similar misjudgement but Nanyn letting him off the hook with a knock on. Koborsi and Khaled Deep made plunges and Ndeira kicked early for Mansour to win the race for the ball to open the scoring. Neil Lowe and Alex Szostak gained Scotland some field position as niggle crept into some of the exchanges, Deeb and Mitchell Stringer receiving a warning as to their conduct.

The Scots began to build pressure on the back of quicker play the balls as they became accustomed to the conditions, Gareth Moore lively as the Cedars gave away consecutive penalties. Brendon Lindsay’s chip was dealt with well by Saleh and it looked as though Scotland’s initiative would be drained by consecutive sinbinnings to subs John Cox and Iain Morrison, both for holding down too long.

Instead, the 11 men thrived while the visitors slowed but not before Nanyn had produced two excellent tackles to hold up Jamie Clark and deny Mansour who came inside on to Saleh’s ball.

John Duffy’s kick to touch turned play around and forced Reece Robinson into an error, knocking on at the play the ball. From that position the Bravehearts got on the score board but not without some good fortune.

Moore’s grubber ricocheted off Danny Chiha, Saleh and Mansour collided and although Alex Szostak missed the rolling ball, Lindsay didn’t for his first try in the colours. Nanyn goaled to put the denuded Scots ahead and matters got worse for the visitors when Allen Soultan became the third off the bench to quickly return to it, Nanyn kicking the penalty. With Lindsay and John Duffy dictating, the Scots thought they were in again, the ball bouncing off the referee for Nanyn who freed Jon Steele, his pass on the inside to Szostak being deemed forward.

That was merely delaying the inevitable, Ndeira’s kick being charged down by hard working Richard Fletcher for James Nixon to cleverly pick up in the wet and canter clear for his fifth try in the blue in two games. Nanyn - almost inevitably - goaled from out wide to make it14-4 at the break, which looked near unassailable in the wet.

The Scots dominated territory at the start of the second period, Fletcher making a terrific break down the left and Reece Robinson unlucky to have stepped into touch when fielding a kick. The Cedars gained a foothold thanks to kicking early, Nixon knocking on and Ndeira’s chip forcing Steele, at full back, to concede a drop out. Despite good ground making charges from Steve Azzi and the irrepressible Salem, there was no finish, which proved costly.

Nanyn and Paddy Coupar fashioned a break out down the right and Lindsay did well to hold on to a kick that came back off Ndeira. Koborsi knocked on bringing the ball out of defence and Jamie Clarke’s ball steal allowed Nanyn to make it 16-4 with a penalty in front. From the kick off Mitchell Stringer made ground, Lindsay’s diving catch kept the move going and Moore’s excellently judged left footed grubber saw Kevin Henderson go over in the corner, Nanyn’s majestic boot keeping his perfect record in tact.

Lebanon were too one-dimensional in their attempts to get back in the contest, although they did force a second drop out from a Ndeira bomb but again allowed their frustration at not breaking the Scottish rearguard to unsettle them. Travis Robinson was sent to the sin bin along with Morrison for the second time but the Cedars’ spirit at least was rewarded with the final points. On the last tackle after a Deeb break, Ndeira’s chip was brilliantly judged by Mansour who sent the ball back on the inside for Nick Kassis to go over.

In the closing minutes Liam Ayoub was put on report for the use of an elbow, with the final whistle bringing the merciful relief of a dry dressing room. 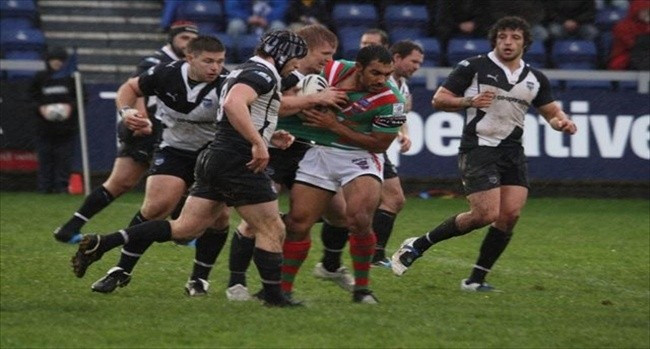