On Saturday Oct 1, in a rain drenched Wilmington, Delaware the final and deciding round of the Colonial Cup was played out in less than desirable conditions. The Hawks, eager to continue their winning ways in the lead up to their 2017 World Cup appearance were slow starters against a Canadian team fired up from recent losses and ready to defend the trophy they have held since 2014.

Just as they had in last weekend’s Americas Championship, Canada took the lead early at Eden Park. Wolverines Captain, Matt Wyles crossed the line in the 16th minute, with Joel O’Niell’s successful conversion taking Canada to an early 6 – 0 lead.  USA would fight back to level the scores only minutes later, as the number 7 Rich Hanson cut through defenders to find the line. Following the successful conversion by Junior Vaivai both teams tried to piece together some decent plays in the wet conditions.  In the dying moments of the half the Hawks were the next to strike. Taking advantage of a napping defensive line created by a break in play, Hawks forward Casey Clark put his head down and ran straight through a poor tackle to score right under the posts. This would ultimately lead to the Hawks leading the Wolverines 12 – 6 at the break.

As the 2nd half got underway it quickly became apparent the ‘arm-wrestle’ was far from over. Hawks took full advantage of a penalty in the 60th minute with Junior Vaivai, extending the Hawks lead to 8 points. In familiar fashion, the Wolverines were the next to rally, crossing the line only minutes later off the back of a cross field kick by Captain Matt Wyles. The quick thinking combination of Kevin Gurniak and Jon  Cregg saw the ball battered back in, with the Centre Cregg crossing to keep the game within reach.

Unfortunately, Canada’s kicking game again faulted as miserable conditions continued to hamper both sides. Canada’s Christian Miller helped set up and then score the Wolverines’ next points with an individual run and completion on the next play. Matt Wyles assumed kicking duties for the conversion however failed to collect the additional points.

With the game tied at 14 all, Canada could smell victory. However, the USA’s talented Junior Vaivai had other plans. With only 2 minutes remaining a loose carry from the Canadians would break hearts as the number 7 sprinted 80 meters to secure a USA victory and the 2016 Colonial Cup series.  Canada tried a short kick off in the last moments of the game but it failed and ended up with Wolverines Captain Matt Wyles finishing the game in the sin bin after descent towards the referee.

Jamie Lester, Wolverines Coach respectively congratulated the USA Hawks on a series of very competitive matchups. “Unfortunately for us the USA has managed to get across the line when it counts to clinch both games. Credit to them for playing until the 80th minute.” For his Canadian side, there was still positives to take away from the match as Canada looks to expand its depth across the vast country. “We need to learn from these experiences and grow for the future."

Canada now regroups to take on South Wales on October 15 at Lamport Stadium, Toronto to hopefully restore some joy in what has been a difficult yet, memorable representative season. 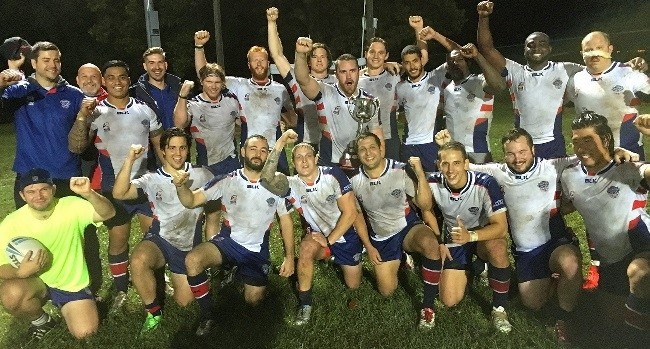