Jarryd Hayne equalled the Rugby League World Cup all-time try-scoring record as he inspired Fiji to a resounding 58-12 victory over the USA in Townsville on Saturday night.

Hayne was instrumental in Fiji’s win, having a hand in most of the Bati’s 11 tries and leading the way in both attack and defence. His 46th minute try took the star five-eighth try scoring tally in three World Cups with Fiji and Australia to 13, equalling the record held by the legendary Bob Fulton since 1975. Hayne’s 13 tries include nine for Australia and four for Fiji.

The only downside to the big win was a broken wrist suffered by Evans when he crashed over for his 18th minute try.

Tears flowed as the Fiji contingent sung their national anthem with immense pride before linking arm-in-arm for a moving pre-game prayer. Shortly after the kick-off to start the game, Fiji wasted no time in going on the attack and looking for points.

It took just two minutes for Fiji to cross the USA’s try-line after Vunivalu managed to get an offload away under pressure, finding Milne who crossed in the corner. With an extra zip in their step, Fiji started moving the ball with ease as the USA struggled to keep up with their opposition.

And within 20 minutes of the opening stanza Fiji had scored at more than a point a minute, running in five tries as the shell-shocked USA finally got their hands on the ball.

With their first attacking chance of the game, the USA made the most of their opportunity through second-rower Matt Shipway. The talented back-rower showed great footwork to beat multiple Fiji defenders before slamming the ball down for an important four-pointer. Despite being behind 26-6 after just 21 minutes of play, the USA showed plenty of heart and effort in trying to contain the ruthless Fiji attack.

But the skill and speed of the Fijian side was too much as Fiji crossed for another two tries, building a 38-6 lead as the half-time siren sounded.

Returning to the field for the second half, the USA had a monumental task ahead of them to limit Fiji’s attacking opportunities and claw back the deficit.

But as he had done the whole game, Hayne terrorised the USA defence and despite having a hand in almost all of Fiji’s tries, the Gold Coast Titan finally dotted down for his own four-pointer. Following a Uate line-break deep in his own half, Hayne was right next to him in support to score right under the posts for his second of the night.

With the scores then 44-6 with most of the second half still yet to play, things were looking very ugly for the USA.

But a try in the 71st minute to Junior Vaivai gave the visitors something to cheer about as Fiji cruised home to their comfortable 58-12 victory. 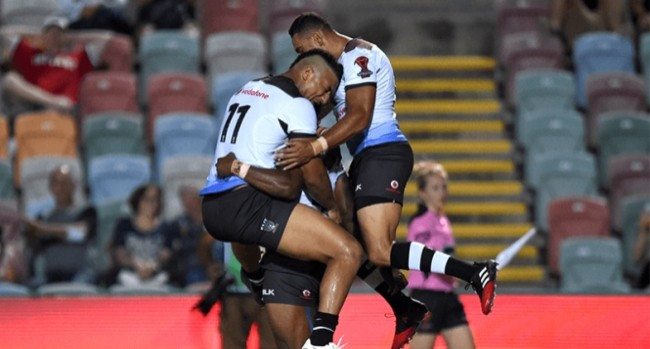