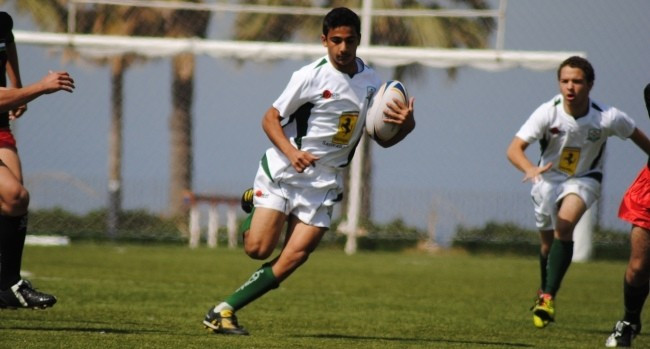 Saudi Schools Select kicked off their defence of the MENA U16 Championship on Thursday with a 20-0 win against Palestine RL U16, the identical score by which they defeated the Palestinians to commence their 2010 campaign. Spurred on by Lebanon's convincing win against the Palestinians a week ago the Saudi team was determined to show their ability. Head coach David Kinkead was happy with a hard fought win against a rugged but outclassed Palestine. “Our defence was superb, particularly man of the match Farid Abdul Wahab and if we tighten up our attack against Lebanon we will be difficult to beat.”

Lining up against an imposing and physical Palestinian team was always going to be tough but the Camels, made up of schoolboys from Lebanon, Palestine, Jordan, South Africa, Egypt and, the majority, Saudi Arabia were more than a match for their opposition, displaying tenacity and technique in the tackle. During the opening of the game both sets of forwards tested each other but led by man of the match Abdul Wahab the team in white and green started to exert their dominance.

After a bruising first ten minutes it was the Saudis that drew first blood as co-captain Rackan Al Moukhtar, the hero of last year’s tense 14-14 draw with Lebanon that saw the Camels clinch the trophy on points difference, crashed over after bursting two tackles. Zander Potgieter converted to give Saudi a 6-0 lead. This was swiftly followed by some hard running from the Camels pack to allow co-captain Hasan Zakzouk to dive over from short range. As the half drew to a close there was still time for debutant Tommy Abdullah to pounce on a loose ball and kick through to ground the ball over the line. With Potgieter again adding the extras the half-time score was 16-0.

The Saudi team were camped close to the Palestinian line for the whole of the second half but a combination of poor handling and unlucky calls meant that the closest they came to scoring was Yousef Safadi's effort being chalked off for a forward pass. However, it was left to Abdul Wahab, fittingly, to complete the scoring with a powerful run. Farid's performance demonstrates the talent available in the region and why English professional clubs Warrington and Harlequins are looking to offer stints to some of the players on show in the MENA championship. All players from the Saudi and Lebanese sides will be looking to impress in the championship decider on Saturday.