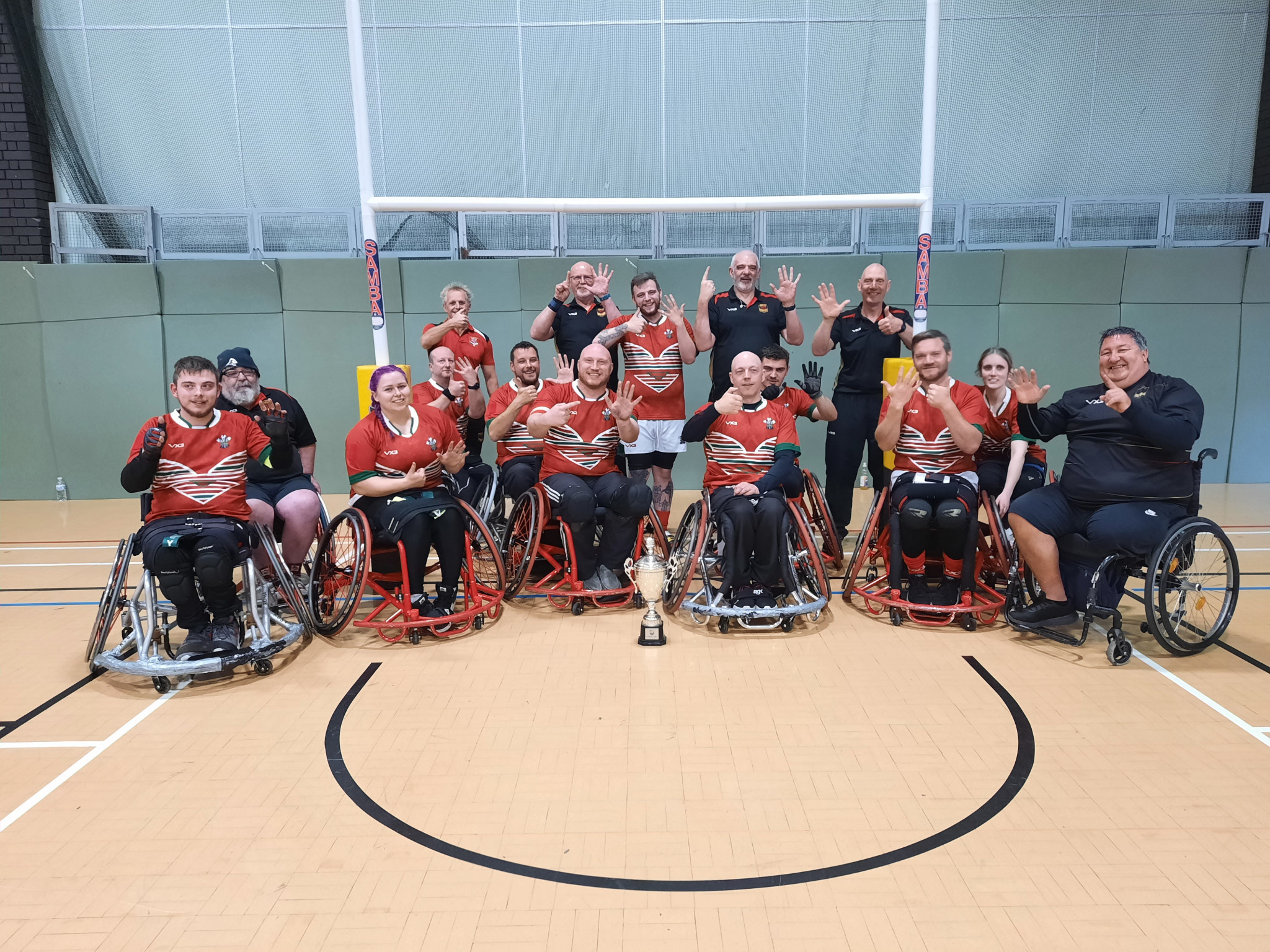 Wales Wheelchair Rugby League international Stuart Williams today became the first player to ever score 50 tries in Wales RL colours as he helped his side to win their sixth successive Celtic Cup.

No player in any other Wales international rugby league side has managed this feat.

Wales beat both Scotland and Ireland to claim the trophy again, with this year’s tournament being played in Plas Madoc, Wrexham.

Williams won his 23rd Wales cap, his 12th as captain, as Wales beat Ireland 64-22 in the first game of the gruelling three-match one day competition. He then won his 24th and scored four more tries as Wales beat Scotland 116-6 – a new Welsh international record for both scoreline and winning margin.

WALES 64 IRELAND 22
In game one, Wales took the lead in the fourth minute with a Harry Jones try in the corner. Scott Trigg-Turner converted before extending the lead further with a try in the opposite corner. His second kick hit the post and Wales were 10-0 up on seven minutes.

Stuart Williams then scored his 49th Wales try on 10 minutes with Trigg-Turner converting.

Peter Johnston hit back for Ireland two minutes later, which he converted himself to pull the score back to 16-6 but Trigg-Turner grabbed his second of the game on 18 minutes which he duly converted.

Five minutes later, Jones stormed under the posts for his second with Trigg-Turner converting to put the score up to 28-6.

Then, just after the half-hour, Stuart Williams got his second of the game, that historic personal 50th. Trigg-Turner converted again before getting his hat-trick of tries and adding a further goal to put Wales 40-6 up at the break.

It took less than a second half minute for Trigg-Turner to cross for his fourth try. Gary Preece added the next Wales try which Trigg-Turner improved before adding his fifth try and converting again.

Toby Burton-Carter crossed for an Irish try, before Mark Williams went over for two more for Wales, all of which went unconverted. Martin added a further two Ireland scores with Johnston converting both, to make the final score 64-22.

Ireland just about clinched the win in a dramatic game where the lead constantly changed hands. Tom Martin gave Ireland an early lead with Peter Johnston converting. Johnston added the second himself, converting again, but John Willans got one back for Scotland straight away, failing to add the extras.

They hit back again on 17 minutes through a Connor Blackmore try with Michael Mellon converting. And with both sides defending well, the score remained 12-10 to Ireland until Mellon landed a drop-goal with seconds remaining in the first half.

Mellon then gave Scotland took the lead for the first time early in the second half with a try that Willans converted. However Scotland’s chances were set back when Mellon was sent-off for following through after Johnston had touched down for a try. Phil Roberts converted, then added a penalty for the infringement from in front of the posts.

The game wasn’t over. Scotland hit back again with a Blackmore try and Willans goal. Ireland then scored two tries on the bounce – first through Martin, which Johnson converted, then an unconverted Johnson score to put them 30-23 up. Again Scotland hit back. Blackmore went over for his second that Willans converted to put them a point behind again.

With seven minutes to go, Toby Burton-Carter scored again for Ireland to put them 34-29 up. Johnston couldn’t land the extras, but did seal the game with two minutes to go with his fourth try.

Scotland were last to score as Blackmore went over for his fourth with Johnston converting, but time ran out for them as the Irish celebrated.


WALES 116 SCOTLAND 6
Scotland needed to beat Wales by 23 points or more to win the Cup, but in the end Wales achieved their highest ever margin of victory and highest ever points scored in a game.

It took less than 30 seconds for Gary Preece to give Wales the lead. Scott Trigg-Turner converted, then scored Wales second try and improved it. 12-0 on less than three minutes. Trigg-Turner added his second, then Harry Jones raced in for Wales’ fourth. Both were converted by Trigg-Turner, but one went over off the bar. 24-0 after less than seven minutes.

After having her first try disallowed, Jodie Boyd-Ward crossed for Wales’ fifth on 12 minutes that Trigg-Turner improved. Stuart Williams wheeled in for his 51st Wales try on 18 minutes with Trigg-Turner converting.

Trigg-Turner, Stuart Williams and Boyd-Ward added further first half tries, Trigg-Turner landing two goals and Mark Williams one, to put the score onto 60-0.

Stuart Williams scored the try of the half on 35 minutes, a stunning Welsh move involving all five players. Along with Stuart Williams, Mark Williams, Lucie Roberts, Jones and Preece were avoiding tackles and making superb passes. Mark Williams converted before adding a try of his own to put the score onto 70-0 at half-time.

It was 76-0 on 43 minutes after Stuart Williams scored and Mark Williams converted. However Wales couldn’t add to their lead for some time, as Scotland upped their game. After being unlucky on a number of raids on the Welsh line, eventually Jay Anderson crossed and John Willans landed the goal.