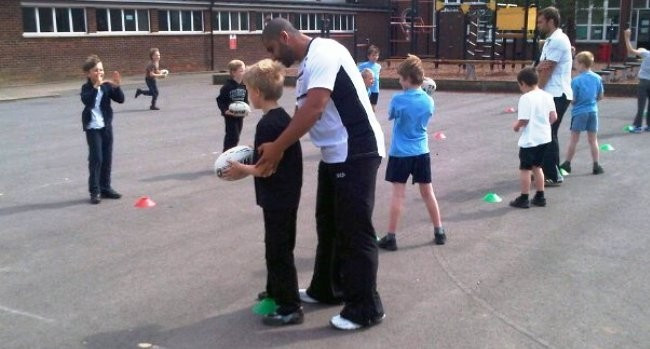 Hull skipper and Exiles second rower Craig Fitzgibbon has lent his support to rugby league’s growth in, seemingly, the most unlikely of places.The black and whites have recently established a remarkable link with the Palestinian refugee camps in Lebanon and beyond when they hosted Ahmad al Masri who, together with his brother Rabie, has introduced the sport to the youngsters there with a notable degree of success. El Masri, 26, spent a week at the KC Stadium studying and involving himself in the community work at the engage Super League club and left an immediate and lasting impression, not least with former Kangaroo tourist Fitzgibbon, who is keen to get more involved in the Palestinian project.

“What a great bloke! That’s development at the sharp end and I hope to assist him as much as I can to help him fulfil his goals,” said Fitzgibbon, who is being lined up as a future coaching consultant. His enthusiasm was echoed by Tongan team mate Sam Moa. “Ahmad talked us through his work in the camps and with UNRWA,” he commented. “I was uplifted by his passion for the sport and will keep in contact with him.”

Ahmad found his way to Hull thanks to the RLEF’s recently launched technical strategy. Along with his brother he was invited to attend a coaching conference at Brunel University in March but because his visa did not come through in time he missed a section of the event. As part of the just-undertaken match officials element, the RLEF arranged a placement at the Airlie Birds to give him an insight into how a British club coached its age groups and approached the work of using rugby league as a social device in the community – something that resonated with the Palestinian rugby league project and its work in the camps of Burj el Barajneh, Sabra and Chatila, Naeme and Mar Elias.

“It was a fantastic experience,” enthused El Masri. “I had a great time and have many things which I am going to pass on to the kids when I get back to Lebanon. I saw the under-15s, 16s, 18s and 20s being coached and went into schools with the Hull coaches and also watched many games. I cannot thank the club enough.”

In addition, El Masri was given rare access to first team training where Fitzgibbon, Moa and their team mates were afforded the opportunity to view videos and photos depicting the PRL’s full range of activities. Jon Flatman, Hull FC’s community and marketing director coordinated the visit and was similarly overwhelmed. “Ahmad’s visit has resulted in a reality check for everyone at the club,” he said. “We were humbled by his commitment to our sport, we were educated by his knowledge and we were excited by his plans for the future. He is a great man who we, as a club, know now as a good friend, an excellent coach and an inspiration.”

Co-incidentally, the club have a Palestinian playing in their youth ranks. Teenager Ali Ibrahim was born in Gaza in the occupied territories. His family has been over here for four years and the powerfully built centre has shown real promise having been selected in the England Under-16 squad for internationals against Wales and France earlier this year.  El Masri conducted a video interview with the youngster in Arabic to show to the boys back in the camps and met his father with a view to building a support network for the burgeoning Palestinian Rugby League project.

“In Hull I saw many facilities and equipment for kids to play rugby but out in the camps we don’t have anything,” El Masri continued. “In every camp they have just two balls to play with and the facilities are so poor that I train the kids on the public beach because that’s the safest place. But you see the same kind of talent and potential.”
In an effort to help out practically, Hull FC and the city’s network of amateur clubs have donated five sets of kit for Ahmad to take back to Lebanon, together with 10 balls and another 10 courtesy of Ali’s father. Ahmad is in no doubt what a difference this will make back home. “This means that I can now set up a league for the Palestinians in the camps. You can’t play without a ball and every camp will have a kit from Hull FC and also proudly wave the Hull FC flag!”

The club is also looking at the possibility of some Palestinian youngsters coming over in the future, while they are interested in sending a delegation over to the camps next year to get a better understanding of one of the sport’s unlikeliest partnerships.