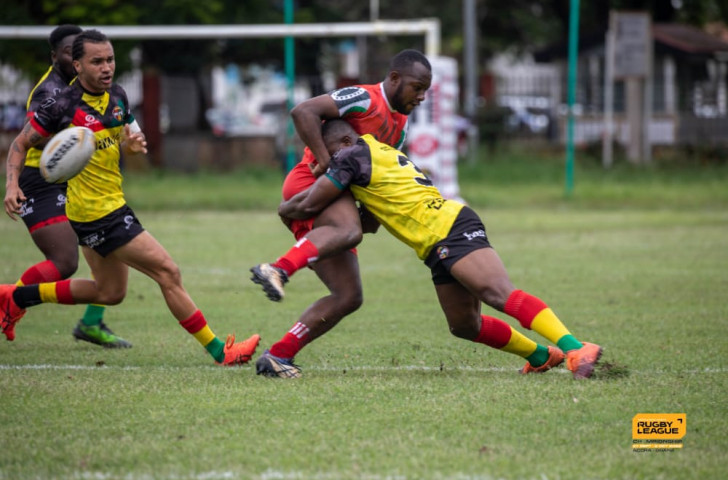 Defending champions Nigeria and hosts Ghana will contest the 2022 MEA Championship final when they meet at the Legon Field at the University of Ghana in Accra on Sunday. In addition, both nations remain on the qualifying road to the 2025 Rugby League World Cup.

They put in impressive second half performances to defeat Cameroon and Kenya respectively in the opening games, the losers meeting for third place in the curtain raiser to the final for world ranking points.

Ghana were held 6-6 in the opening period by the Kenyans, who are playing in their first tournament, but two tries each from Emmanuel Acheampang and Chris Da Gama – who also kicked three goals -  saw the Leopards home, 26-6.

Ghana head coach, Andy Gilvary, commented: “It was exactly what we expected, Kenya threw the ball around, had great core skills and were very physical. We didn’t stick to the game plan in the first half, only completing half our sets, but the guys fixed that in the second period, put a lot of pressure on and ultimately were able to get the result we wanted.”

Opposite number John Mbai said: “We gave a good account of ourselves in the first half, but put ourselves under unnecessary pressure in the second. It’s a learning curve, we need to get better at playing out our sets of six and not getting impatient, but being our first experience of a tournament like this, we competed well and it’s a good place to start.”

Cameroon, who overcame flight difficulties and scored the first points, were also undone in the second forty minutes against Nigeria, for whom loose forward Michael Ayodeji crossed for a hat trick, as they ran out 36-2 winners.

Nigeria coach Bolu Fagborun – standing in for Joe Mbu whose wife is due to give birth, noted: “It was fantastic to get the win. Cameroon were really aggressive at the start and were very impressive physically but as the guys realised they needed to do the simple things well, the scoreboard started to look after itself.  We’ll have to move to another level in the final but these guys really want to express themselves.”

Cameroon player/coach, Kahlil Njoya, said: “For what we did, I’m really proud of my guys. Our preparations were disrupted but physically we are all ready. It won’t be easy but we are looking forward to the Kenya game.”