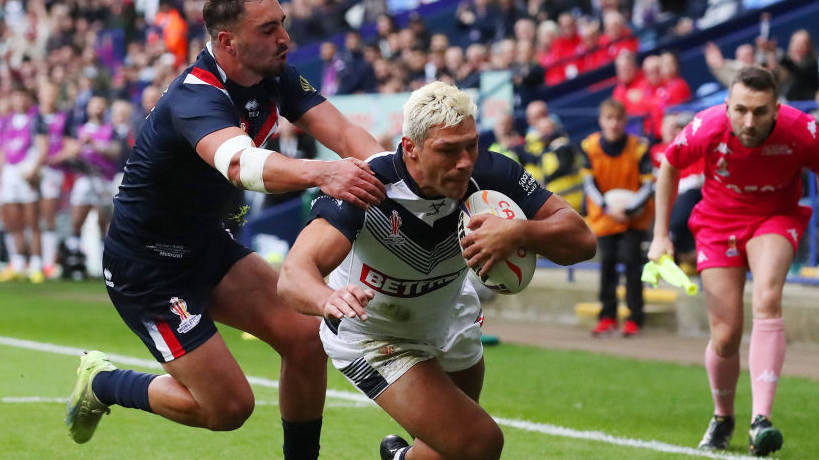 England's Men and Women will return to action next April in a double header against France – the hosts of the 2025 Rugby League World Cup.

Both matches will be staged at Warrington’s Halliwell Jones Stadium with England Women facing France at 2pm, followed by the Men’s match at 4.30pm.

Tickets are on sale now with a limited time Early Bird offer of all tickets at £15 Adults, £10 Concessions and £5 Under 16s at eticketing.co.uk/rugbyleague. This special offer runs until early January, making tickets more affordable for all in challenging economic times.

In addition, ticket buyers can choose to pay £5 extra per ticket as a donation to Rugby League Cares. The charity will use all donations to support disadvantaged children throughout the Rugby League community with the opportunity to come along and watch their England heroes when they take on France in Warrington.

Mark Foster, the RFL’s Chief Commercial Officer, said:
“This autumn has been another reminder of the importance of our England teams in capturing the imagination of sports fans and TV viewers beyond our regular Rugby League audience.

“We wanted to ensure that our England teams would return to action in front of a home crowd as soon as possible in 2023 – and we are pleased to be able to arrange a double header against France, whose Men’s and Women’s teams will also be moving on from their World Cup campaigns and starting to focus on the exciting prospect of hosting the next tournament in 2025.

“This will be the third consecutive year that we have staged a double header of Women’s and Men’s internationals at Warrington’s Halliwell Jones Stadium, which was the venue for one of the most memorable occasions of the World Cup when the Samoa and Tonga Men’s teams contested a compelling Quarter Final.

“We are also delighted to partner with Rugby League Cares so that ticket buyers can have the opportunity to give back to the Rugby League community during difficult economic times and provide young, disadvantaged fans with the chance to watch their England heroes against France.”

Discussions are continuing with relevant bodies including European Rugby League regarding the 2023 international programme for England’s Wheelchair team – who will play France in the World Cup Final at Manchester Central on Friday night.

Luc Lacoste, the President of France’s Rugby League Federation, said:
"The World Cup ends next Saturday in England, and we are delighted to announce this agreement with our English friends for the implementation of these two Test Matches, Men and Women, in April 2023.

“For several months now, we have been working hand in hand with the RFL to systematize international matches between our two nations every year. We also work for the categories France B, U17, U19 and the Para XIII Armchair France team. This first announcement therefore confirms the desire of our two Federations to make a common path until 2025.”