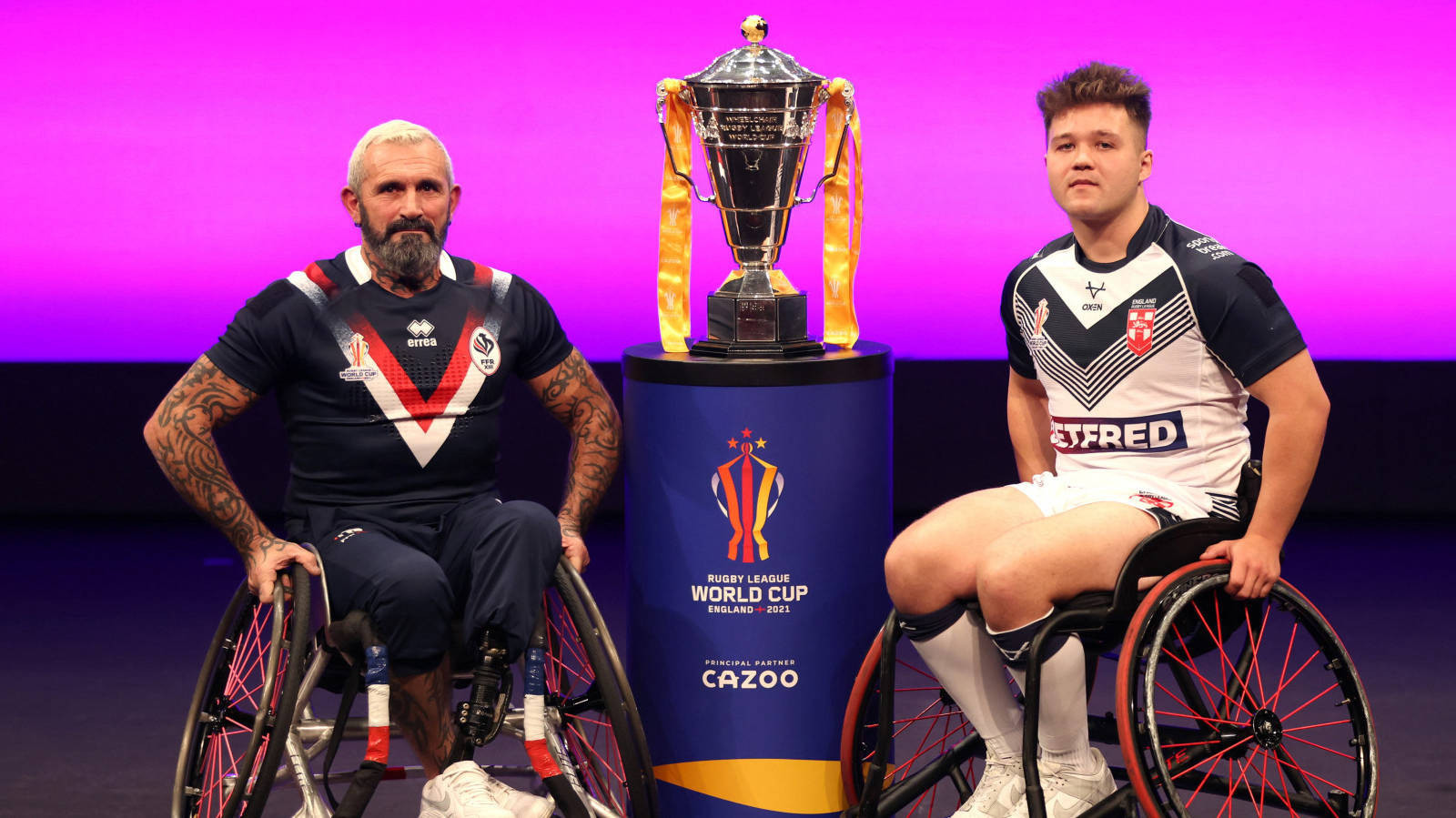 England’s hopes of Rugby League World Cup glory on home soil rest solely with the wheelchair squad but James Simpson insists they are not feeling any extra pressure.

Simpson and his teammates take on France at a sold-out Manchester Central on Friday (18th November) night in the third consecutive final to be played between the two nations. Kick Off is at 7.30pm.

Les Chanticleers have won the previous two by tight margins but Simpson is confident England can turn the tables and provide a welcome pick-me-up given semi-final defeats for the men’s and women’s teams.

“We’re not suddenly under this extra pressure to win because the other two teams didn’t make it,” he said.

“It’s not a case of ignoring it [pressure], we just don’t feel it and that’s not the talk. It’s not a conversation that crops up and it’s certainly not something I feel.

“We are all one big family in the England set-up and everyone supports everyone.”

The hosts will hope for a big performance from the prolific Jack Brown, whose 15 tries so far have taken his overall World Cup tally to 52, while Adam Rigby is another survivor from the squad which won the inaugural tournament in 2008.

“Back then, we came back as world champions, arrived at Manchester Airport and there was one guy with a phone camera from the local newspaper,” Rigby said.

“This time, every game has been on TV, so in terms of building the profile of the sport, there’s no comparison whatsoever between the two.

Declan Roberts, who reached the final at his dad’s expense when England beat Wales 125-22 in the last four, has backed his side to cope with the pre-match butterflies as they set their sights on history.

“As much as people will say they’re not nervous, they’re lying,” he said. “This will be the biggest game of everyone’s lives and there will be some nerves, otherwise you’re not human.

“But there’s definitely huge excitement at playing in front of a big crowd in such a big game.

“We’re trying to savour every moment of the build-up and we can’t wait to get out there and get stuck in.”

Clausells has overseen a virtually flawless campaign from the reigning back-to-back champions, who topped their group with ease before seeing off Australia 84-40 to make their third successive final.

Brown scored eight tries in England’s 125-22 semi-final hammering of Wales and is the competition’s all-time record scorer with 52 but Clausells insisted Les Chanticleers have plenty of threats to be wary of when they take on the hosts.

Clausells said: “Jack Brown is a very, very good player and what he is doing for wheelchair rugby league is phenomenal.

“We know Jack and we are obviously going to have to mark him but others as well. He can’t win the World Cup on his own.

“We’ve got some very good players of our own like Jeremy Bourson. It is going to be about fighting fire with fire tomorrow.”

Brown and Bourson have scored 15 tries apiece at this tournament but France’s Mostefa Abassi leads the way with one more while England can also call upon the experience of their most-capped player Joe Coyd, who has crossed the line 12 times.

Coyd’s elder brother Tom coaches the wheelchair side, who are the last remaining England team in the three competitions after both the men and women suffered semi-final heartbreak.

And they will have a raucous home crowd roaring them on with the 5,000-seater arena sold out but opposing captain Clausells insists his side will have no problem blocking out the noise as long as they can still hear each other.

He added: “The crowd is an element to consider, there will be lots of people and lots of noise.

“We hope we will be able to communicate effectively between our teammates in order to execute the game plan we want to put in place tomorrow night.”

This is the third consecutive final between these teams with France winning the previous two by just two and four points respectively.

England will be bidding to finally dethrone the sport’s founders in Manchester, but Clausells believes his side just need to focus on themselves and will take a win by any margin to lift the trophy again.

He explained: “If we win by one point, that will be enough for me. Obviously, that is less than before but I’d be happy with just the one.

“We need to play our own style of play and do what we know how to do well. We appreciate that England are the opposition but we have just got to do what we can do well.”