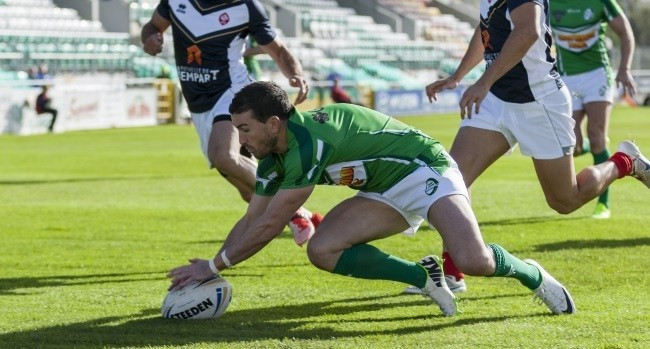 For the first time this year, there are no debutants in the Welsh squad as they face Ireland on Sunday in the final game of the European Championship, at the Glyndwr University Racecourse Stadium in Wrexham (kick-off 2.30pm). A 17-point win for John Kear’s men will deny them the wooden spoon after defeats to Scotland and France while, should the French triumph in Galashiels tonight, a large win for Ireland could give them the title, bringing 2016 Four Nations and 2017 Rugby League World Cup qualification.

South Wales Scorpions’ Kyle Scrivens is the only player from the French game to miss out this time around, while Byron Smith comes into the Welsh squad for the first time since 2007. Joe Burke returns after missing the trip to Albi while Scorpions’ skipper Phil Carleton is also named in the 20 after being left out last week.

“There are a few disappointed players,” said Kear. “This year we’ve tried to give as many people as we can the opportunity to prove themselves but we’ve now gone with the side that we feel can challenge the Irish on Sunday. “I’m confident that we’ll continue our upward progression. The French game was a step forward.”

Ireland have received a massive boost with the inclusion of assistant coach for this tournament, Castleford half back and most-capped Wolfhound, Liam Finn. Finn has been unavailable through injury for the opening two games of the tournament but his inclusion will provide vital experience in the pivotal role.

Ireland coach Mark Aston is aware how high the stakes could be come Sunday afternoon. “If France do us a favour then where we finish is in our hands,” he commented. “Being able to include Liam is great for the whole squad. He is a quality player who showed that in Super League this season. Wales are a very good side and we will need to be at our best if we want to get our second win this year.”

A day of rugby league at the Glyndwr University Racecourse Stadium starts at 11.30am when Wales take on Ireland at U19 level and home coach Mike Grady has one injury doubt going into the game. Bridgend College’s Alex King suffered a nasty gash to the eyelid in Wales’ 32-14 defeat to the English Lions in Wigan last Saturday and the coaches are assessing his situation ahead of the game. Ireland’s U19s also go into this game on the back of a defeat having lost 42-10 to Scotland in a bruising encounter in Dublin last week.

Pictured: Shannon McDonnell is set to win a third cap for Ireland.