BROUGH CROWNED PLAYER OF THE TOURNAMENT 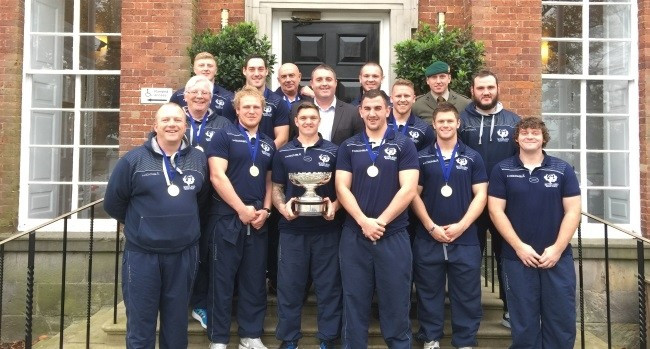 Scotland skipper Danny Brough was presented the Player of the Tournament trophy by league legend Malcolm Reilly this afternoon, as the Bravehearts formally collected the European Championship trophy at Red Hall, Leeds. Brough led his country to their first-ever silverware 20 years after the formation of Scotland Rugby League, which also marked coach Steve McCormack’s 10 years at the helm in fine style, the pair lifting the European Championship together.

“I’m really pleased with the individual award and I wasn’t expecting it,” Brough said of the inaugural honour, presented for performances on the field and his support off it. “I just tried to transfer my passion to the young lads, I love to win at everything I do and I think that showed. This justifies wanting to play in the European Championship,” Brough continued. “Any time you receive a trophy is great, not just for me but for Scotland. Huddersfield backed me on this, and I thank them for that, but I enjoy myself every time I meet up with the Scottish boys.”

Victory will see Scotland play in the 2016 Four Nations tournament against England, Australia and New Zealand and Brough is particularly looking forward to being involved in that.

“That’s really exciting. We are obviously under no illusions that we need to get more players into our squad but we’ve two years to build up to it,” he noted. “We’re behind the eight ball, we understand that, we are facing the best in the world but hopefully we can cause an upset. The spirit we showed in last year’s World Cup and now to win something on the back of it just shows that we are moving forward.

“To achieve something like this and to blood eight new debutants is really special and showed we were worthy of wearing the shirt. I love being an experienced player among them, the young lads are always asking me questions in camp but there are no egos,” Brough added. “That’s how it should be, we all get along and that’s where we get our hardworking mentality from.”

Several members of the victorious Scotland squad and backroom staff were also present to pick up their gold medals from Reilly, a passionate advocate for the international game having played and coached in both hemispheres.